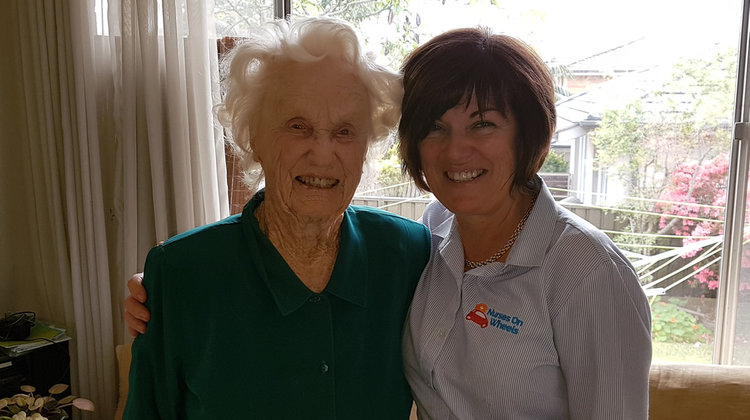 Belle Goodacre, a patient of NOW, turned 100 years old on 29 November 2017 and to celebrate this milestone, nurse Richelle and our Communications Consultant Kristin, had lunch with Belle and learnt about her life.

Nurses On Wheels has been visiting Belle for one year, following a number of falls. At 99, this is the first time Belle has required in-home support of any kind.

Belle was born in Sydney in 1917 and finds great satisfaction in only needing to take three pills per day, compared to her friends who line-up their pills at each meal. Her last hospital visit before her fall was during childbirth in 1945!

Belle has an exceptionally positive outlook and is very independent. She is the picture of good health.

Belle attributes her longevity to staying active and independent and having lifelong friendships.

Belle’s father gave her sound advice as she was growing up: “Never mind saving the first penny you get, save your first friends.”

Belle had a lifelong friendship with Ariel Adams, who sadly passed away earlier this year, one week shy of her own 100th birthday. Belle and Ariel had been friends for 95 years, having met at Alexandria Primary School when they were five years old. They were inseparable.

When Belle and Ariel were 13 they were discussing what to go without for lent and decided to go without sugar in their tea. They didn’t even drink tea! Belle’s friendship with Ariel guaranteed laughter and fun from a very young age. Since then Belle has never drunk sugar in her tea or coffee.

The girls enjoyed ice-skating together as well as playing vigoro for the ‘Red Robins’ through the 1930’s (a team sport combining elements of cricket and tennis).

After leaving school, Belle and Ariel worked together at Winns department store in Redfern. When Belle was transferred to another store in Camperdown, Ariel quickly followed. Belle even met her husband George at Winns.

Belle and Ariel went out dancing and enjoyed outings in their social circles as young ladies. The Showboat on the Sydney Harbour was a favourite and it was here Belle met Ariel’s future-husband, Merv.

Both Belle and Ariel were married in 1940, with each, the other’s maid of honour. Belle’s father even gave them both away.

The foursome continued their friendship throughout their lives, raising families together.

Belle had her two children during the war but lost her first child during childbirth.

Belle, George and Carole moved to Oatley in 1949, building the house she still lives in today. She purchased the block of land in 1945 while George was away at war but the house took a long time to build due to post-war rationing. Rationing even dictated the size of the house – 12 squares with two room layouts to choose from depending on the number of children in the family. Belle paid £150 for her land and £2,000 to build. Most of her street was still bush at the time – a far cry from its current reincarnation, as developers knock down 40s and 50s houses to replace with townhouses and mac-mansions. Her husband was thrilled with the land when he returned from war.

Ariel moved to Hammond Care, Miranda in 2013 following a diagnosis of dementia. Belle visited every second Thursday, catching two buses and a train to Miranda where she sat and spoke to Ariel every week – even though she never replied. Her four children are like family to Belle. Belle is godmother to one of Ariel’s daughters.

Belle and Ariel celebrated 95 birthdays together throughout the years.

After their husbands had both passed, they celebrated their 80th birthdays together on a three-month world cruise, visiting Panama, New York, France and Italy.

Belle was looking forward to them both celebrating their 100th birthdays together this year but sadly, Ariel passed away, just one week shy of her 100th  birthday earlier this year.

Belle’s physical activity continued into her married life, playing tennis on weekdays with her female friends, and on the weekend with her husband and friends. Belle later developed osteoporosis and was no longer able to play tennis on the cement court. She took up bowls and New Vogue Dancing in her seventies, which she continued for 20 years. She also enjoyed a lot of walking over the years.

Belle has a fabulous positive outlook and tries to stay as independent as possible and she does all of her own gardening. Roses are her favourite plants and her front yard was blooming with azaleas when we met for lunch. She planted everything in her garden, and spreads giant bags of fertiliser by herself, every year.

Belle admits she can’t do without her daughter Carole. While Belle is still able to do light shopping, Carole does the weekly heavy shop and brings over some home-cooked meals. She also joins Belle for their weekly bingo outing.

Belle catches the bus from Oatley to Hurstville once a week to meet Carole for coffee, bingo and grocery shopping. Her eye specialist recommended bingo to help prevent vision and brainpower loss. Belle was originally going to Hurstville Catholic Club with her girlfriends, but sadly discovered, when she returned to bingo after her November 2016 hospital visit for a fall, that her bingo friends had all passed away. Carole used to meet her mother for coffee in Hurstville every Wednesday and then do her grocery shopping while Belle played bingo but after going to bingo alone a few times, Belle invited Carole to join her. She reluctantly agreed to attend and has happily attended with Belle ever since.

Belle maintains a busy schedule, despite turning 100 on 29 November.

She has a regular visit from her grandson and great grandson on Mondays when they bring her a few meals. On Tuesdays Belle goes to the Senior Citizens Club and Wednesday is bingo with Carole. Thursdays are her weekly visit with NOW, where our nurses often find Belle sitting ready and waiting for us to visit so she can get on with her active day.

Belle has been celebrating her 100th birthday in many ways…

Oately Senior Citizens Club held a birthday party for her during her birthday week and on Wednesday, 29 November, her actual birthday, she went out with her daughter Carole and her husband Peter.

On Sunday, 3 December Belle celebrated with family, friends and relatives with a Garden Party. Belle’s daughter Carole and her granddaughter prepared lunch for 44 people including friends and family who came from afar – Belle’s grandson and family came from Melbourne, Carole’s friend (Belle’s second daughter!) from Coffs Harbour and other friends travelled from Bathurst and New Zealand. All gathered in Oatley to celebrate and honour a very special lady.

Enjoy all the love and kindness that comes your way Belle, it is well deserved. You are inspirational. Congratulations on your centenary! 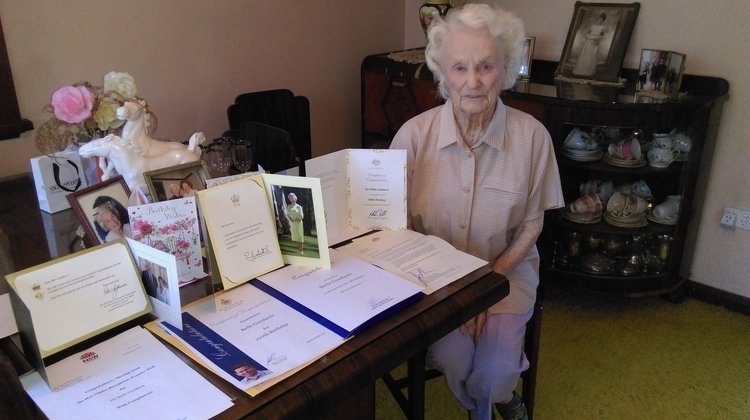 Belle with her letter and cards of congratulations

Nurses On Wheels has rebranded to Clever Care NOW

END_OF_DOCUMENT_TOKEN_TO_BE_REPLACED

Nurses On Wheels has been presented with $50,000 from Bayside Council via the State Government’s Stronger Community Fund Grants. Over $500,000 was awarded to 15 local community groups at a function on Thursday, 22 February.

END_OF_DOCUMENT_TOKEN_TO_BE_REPLACED

Expressions of Interest are open for exhibitors at the 2019 Clever Ageing Expo, Tuesday 19 February at Club on East Sutherland.

Following on from the success of our event in 2018, we welcome back existing exhibitors and invite new organisations to be involved in 2019.

END_OF_DOCUMENT_TOKEN_TO_BE_REPLACED

We are delighted to announce that from April 2019, Clever Care NOW expands its services into transitional nursing care through the acquisition of SmartCare.